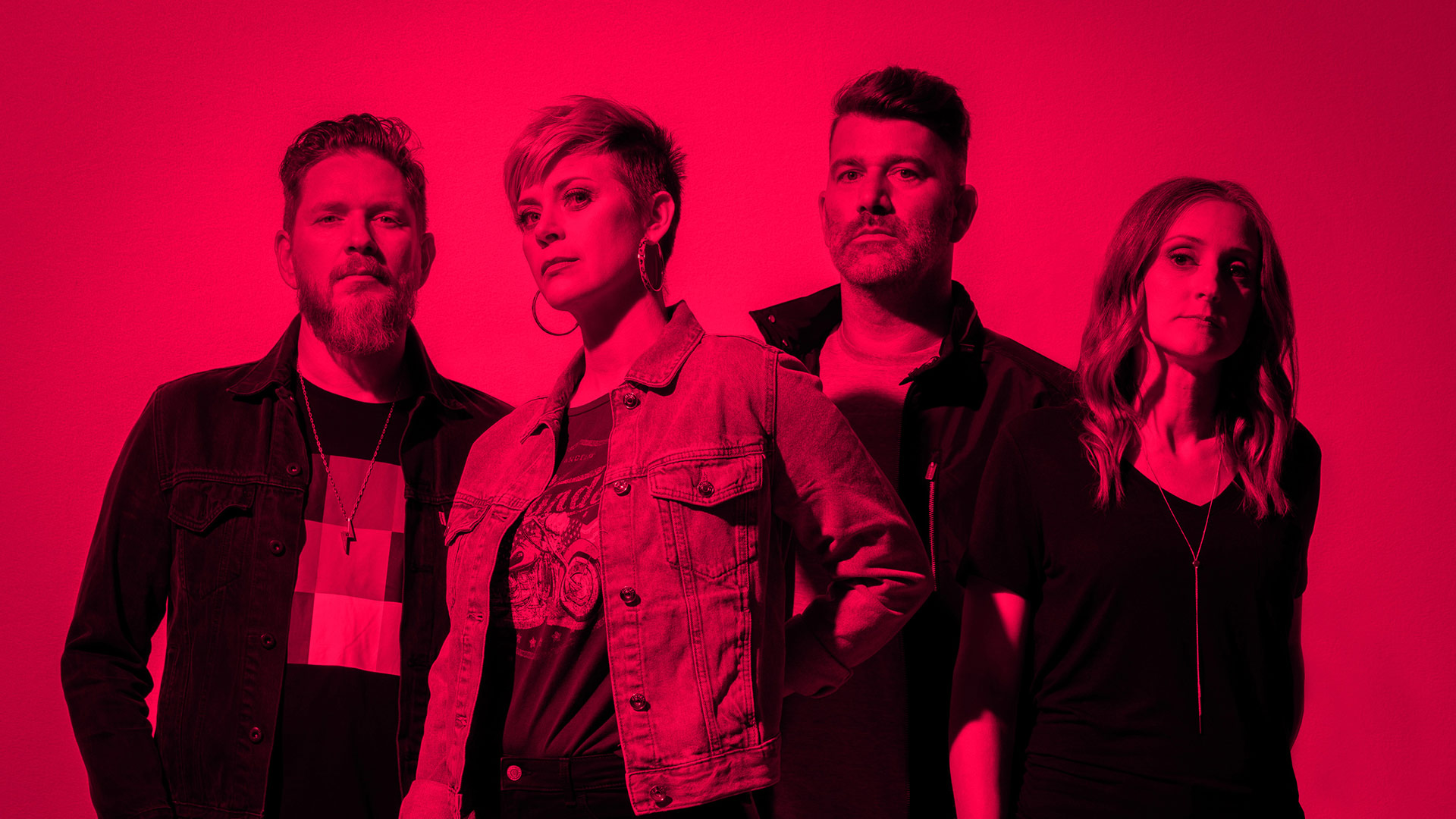 I WON’T LOOK BACK- Fireflight

It’s probably no coincidence that adversity feeds creativity, and in the case of modern rockers Fireflight, every ounce of pain, uncertainty and frustration paved the way for progress on its fifth long player INNOVA (more on that mysterious title in a minute). In addition to leaving major label life behind after eight years, the band that’s been together since 2000 trimmed down to the foursome comprised of vocalist Dawn Michele, bassist Wendy Drennen, guitarist Glenn Drennen and drummer Adam McMillion, all of whom encountered a lengthy season of grueling songwriting to not only refine themselves as artists, but also as human beings committed to a purpose-driven career defined by authenticity at every melodic turn.

“We always used to joke, ‘this is a writing year, so I wonder what’s going to happen’ since we’ve always seemed to go through the ringer every time a new record is around the corner,” observes Dawn with a laugh. “We use those situations in our songwriting so people have the ability to relate and understand us on a personal level. The more feedback we get, the more we notice a need to feel there’s someone else out there who understands. We make a lot of mistakes and have gone through terrible spots where friends have walked by our sides, and as we’ve become full on that love, we want to pour that back out with compassion towards others. The dark times usher in the light times and we want to shine a light because we know what it’s like.”

While Fireflight has never been shy about its struggles with self-esteem or simply getting along like any ultra-close knit family prone to disagreements, the group was also at a creative crossroads following the departure of guitarist Justin Cox (who stepped down to spend more time with his growing family). “At that moment, we all just sat down and had to decide how we were going to move on, which was a very defining moment as far as figuring out our identity,” explains Glenn. “While he was very instrumental in the past music, lyrics, vocals and production, it also opened up a lot of avenues and made us focus on the kind of music we wanted to write. After a lot of hard conversations, we started referencing artists like Imagine Dragons, Ellie Goulding, Katy Perry and newer Coldplay, taking the stuff that’s pop-driven, but bringing in the harder edged Fireflight sensibility.”

Another fresh turn of the page came from willingly leaving label life after an immensely fruitful run. Fireflight built a fiercely devoted following across four albums pushed through the major label system, including The Healing Of Harms, Unbreakable, For Those Who Wait (which cracked Billboard’s Top 100) and the #1 Christian Rock Album, Now, which surfaced in Spring 2012. Fireflight relied on the same fans who gave them 13 million views on VEVO and #1 singles at specialty radio to create INNOVA, with a PledgeMusic campaign that hit 125% of its goal.

“For the most part, we had a great relationship with our label for the past eight years, but we were not going in the same direction as the other artists on our label,” suggests Wendy. “In order for us to get the attention we needed, we took the project into our own hands, which was a very scary thing to do because we could only hope we had enough fans that believed in us. But we started fresh, found there were a lot of people out there who had faith in what we were doing and that became another part of our renewal process.”

Adds Dawn: “Through the years, our music has always dealt with difficult circumstances and been kind of intense, so we have a super broad age group connected by the fact they may be going through a crisis. We’ve met so many who come from tough backgrounds or with family issues and I guess we’ve struck a chord. Our music gives hope and gives people a chance to glean power from victories instead of being a victim, which may be a reason why our fans are so devoted. We run all of our social networking pages personally and we make it a point to reach out to them and develop relationships on an individual basis.”

Add up all of the above, alongside the fact that this is Fireflight’s most diverse yet simultaneously vulnerable disc thus far, and the new album’s moniker INNOVA (the Latin word for “renew”) is indeed a fitting phrase. And there’s even one more upswing to that pendulum courtesy of Dawn, who recently announced she and her husband are expecting their very first child early next year.

“We’ve always liked words with a strong visual presence that have the potential for hidden meaning and symbolism in the art work,” offers Glenn of a title that’s stirred up quite the curious enigma for longtime listeners. “INNOVA is a really old word, but it’s also almost futuristic in a way. It really told the story in one word of bringing what Fireflight has done in the past, but also moving it into the future. The official release date is 5/5/15, which is timed so Dawn can take time off after the baby, but it’s also significant because it’s going to be our fifth album and celebrates the 15th year of the band.”

Besides all the musical strides everyone has made collectively, members have literally grown up together from wide-eyed teens through young adults, who’ve certainly found significant success thus far, but will be the first to admit there’s still a lot to learn. “I’m really ignorant about how much having a baby will change my life, but I’m keeping a cool head about it,” admits Dawn of the unexpected delight, before Wendy, who has a four-year-old with bandmate/husband Glenn, lends some sisterly advice. “Ignorance is bliss! You’ll need to keep a flexible mindset for sure, but you’ll also always have the support of everyone around you.”

All of these many emotions are noticeably present within the consistently expressive INNOVA, anchored by the lead rock single “Resuscitate,” which stays true to Fireflight’s heavy musical roots across a narrative of feeling pushed to the absolute limit, but nonetheless suggests digging down deep within a well of faith for a jumpstart rather than simply throwing in the towel. Clad in the up-tempo tradition of Katy Perry’s “Firework,” “Lightning” continues in the group’s lengthy line of empowerment anthems, dismissing the media’s perfectionist lies and channeling the power of one friend believing in another (so much so that they may even feel capable of conquering the world by the end of the sing-a-long).

The amped up energy of “We Are Alive” taps further into the concept of community and the ability to build one another up, while the aggression-fueled “Keep Fighting” makes a pretty convincing case that a relationship must go beyond the definitions of society’s more disposable side and truly invest into each other’s well-being, even when circumstances get a little rough around the edges.

“With this record, we specifically took a step back and pinpointed everyone’s individual strengths and roles in the band,” discloses Glenn. “Dawn’s the strongest at lyrics and melody, so she led the charge in that department, then everyone put their own perspective towards their own parts. We surrendered to the fact that everyone has their own strengths, which we think resulted in stronger songs overall. We were also very intentional about the people we worked with on additional writing and production, who include Geoff Duncan from Rapture Ruckus, Rusty Varenkamp [whose more than 100 credits include four Grammy-nominated albums], plus Joshua Silverberg and Kipp Williams, who worked with us on the lion’s share of the songs. The overall goal is to just continue to try to push ourselves, the limits of our art and keep reinventing ourselves, while also staying approachable and transparent.”

And with the perspective that can only come from the beat keeper’s position, perhaps Adam paints the most vivid picture of what INNOVA means to this veteran band at the precipice of a bold and compelling re-introduction. “This is the same band with four of the same people saying the things that are on our hearts, but it’s a different package with a fresh feel and a little bit of a face lift you could say. Every night from where I’m sitting, I see the connection that’s happening on fans’ faces and then I hear all the stories from many of them firsthand after the show. People are genuinely searching for community and we’re real people who actually care about them. More than merely making a record we’re proud of, that’s the heart of what Fireflight means to us.”